You want to get better at running right, that’s why you’re here, reading this under that catchy headline?

Well, I’ll let you in on a secret, there are no shortcuts. However, there are simple changes you might be able to make that will produce results.

Still reading? Excellent, thank you! I’m sure I’ve lost a few already. You must be committed! I’m going to share with you the two things I consider most important in making steady improvements.

Becoming a better runner involves going out and running, a lot. You’ll see training plans all over the internet and in magazines. You might download and follow one, or adapt one to fit your own life. You might make one up yourself completely or have one set by a friend or a coach. One thing they’ll all have in common is that you go out the door and run.

But what kind of running? Easy? Threshold? Speedwork? Tempo? Recovery? Long Run?  And then there’s further questions such as how fast/slow? And how long?

And this brings me to my first point.

I’ve seen marathon plans that will have you running a 20 miler even though weekly mileage hits a maximum of 35 per week. I’ve seen lots of runners who ONLY run fast on all of their runs. And I see lots of injured runners who don’t take adequate rest.

The rules I recommend are as follows:

What do these rules mean? They should mean that you feel fresh enough to tackle your speedwork effectively, and that you are developing a strong aerobic engine without over-training.

If your speedwork or long run go over these amounts, they often demand more recovery time which may result in lost training days…..or worse…..injury.

Getting the BALANCE right will mean you are more likely to achieve my second point without incurring injury or fatigue.

This bit’s easy on paper. Just go out and do it, week in/week out. But as we all know, life likes to throw obstacles in the way, so here are my tips on remaining consistent:

If it’s getting tired after a number of weeks, it might mean you need to pull back on something. Maybe cut the mileage, or trim your pace a little.

Your body will normally give you signs that its reaching breaking point (elevated resting heart-rate, poor sleep, lack of motivation, restlessness, halt in progress etc.) listen to them before it’s too late.

We walk a fine line between peak performance and overtraining, lets try and stay on the right side.

Rest and recovery is equally as important as running, its where your body adapts to the training you’re putting it through. This will demand a blog post all of its own but here’s 3 quick pointers:

If you can keep up well balanced training consistently then results WILL follow.

I’d been looking forward to Goodwood this year, especially as my last race (an attempt at the Downslink Ultra) resulted in a DNF when I pulled out at 21 miles.

Goodwood is the first Sussex XC League race of the winter and is a 2 lap undulating course through the woods of the Goodwood estate. Its billed as 5 miles but I think it comes out at just over 4 and a half – leading to some rather flattering times. I came into this race feeling well trained but unable to shake a hamstring problem in my left leg – the same problem which caused my DNF 3 weeks prior.

After meeting my teammates in Tuff City I had a gentle jog of the top field followed by a thorough warm-up whilst the girls races were on. The ground seemed pretty firm, no mud to be seen but soft enough to warrant my Inov-8 X-Talons. 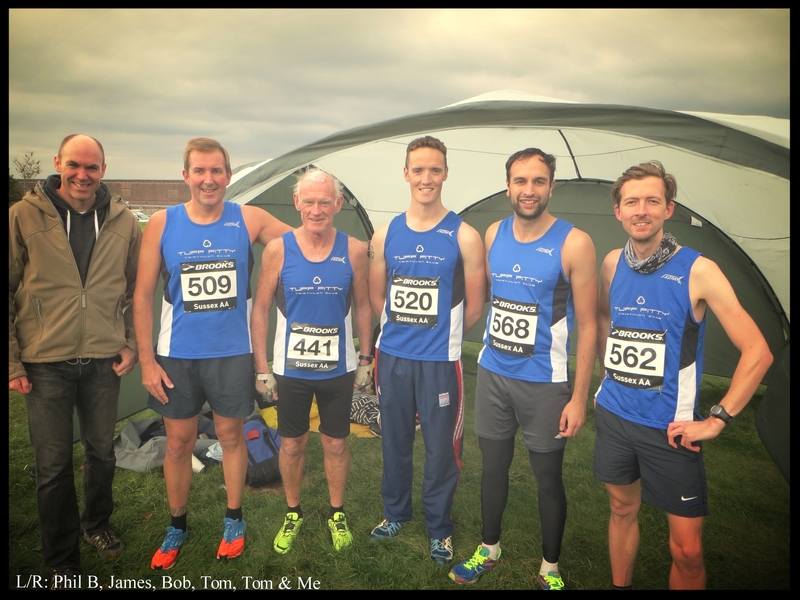 The clock ticked over to 2:30 and we made our way to the start line, as we got into position I spotted a chap from Worthing Striders who ALWAYS beats me by a couple of places, “you’re my target” I told him. He looked at me, totally bemused, he has no idea of the mental torment he’s caused me over the past year or so, this time, I was determined to beat him if nothing else. I found out his name (Andy), and lined up directly in front of him to hamper his start. It was either that or trip him from behind.

The gun went off, the watches went beep, and the thunder of feet across the turf sounded like The Grand National on TV. I did my best to relax and not get caught up in the mad rush to the first corner like I usually do. I heard my team-mate James chuckling away as I passed him just before the corner, he’d realised at this point that he’d been less in control of his start than he’d planned and something was definitely awry if he was ahead of me & Tom! 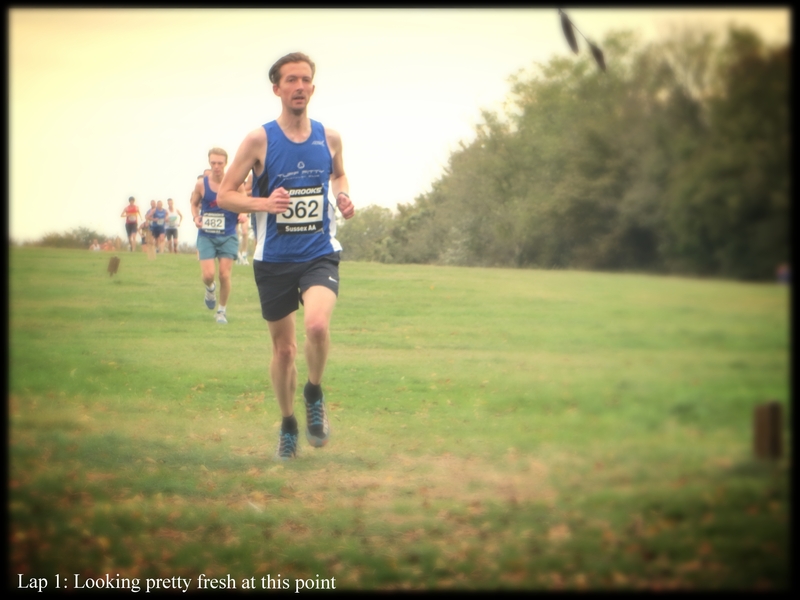 Andy from Striders eased past me as we dropped into the woods but I stuck to my race plan, of taking the first lap steady and trying to do even or even negative splits. Teammate Tom had moved about 50m ahead and I knew he had a similar plan to me, I was also concious that Tom is much quicker than me so if I was reeling him in, I was probably doing it wrong. So I reigned it in a bit on the flat sections, kept my cadence up and my breathing easy, said thank you to the fellow Tuffs cheering us on from the sidelines. I’d noticed that I was catching Tom on the uphill sections and as I went through the halfway point I drew level with him, we had a quick chat, he was feeling good on the downhills so we ran together for a while at a good pace. As the course dropped into the woods again we overtook people for fun, flanking them on both sides and reducing them to tears (I imagine). I started to gain a few meters as I’d seen my nemesis Andy further ahead and I felt now was a good time to make my move. I tried my best to make it seem like i was barely breathing hard as I went past him and if I’m honest, I felt really good. This was going to plan.

I approached a sharp right which then goes into a steep drop, the fastest point of the course, quite technical and requires quick feet. A Phoenix runner in front of me came to what felt like a complete standstill, I nearly flattened him! I danced round, almost into the trees and managed to squeeze past without shoving him to the ground – downhill running is a real skill, and he either didn’t have it or he was using that section to catch his breath.

I pushed on and had a strong 4th mile, this was mostly uphill and I opened up 30-40m on Tom at this point, the Phoenix runner I’d gone past a few minutes earlier was clearly better going up as he came back past me with half a mile to go. I hung onto his tail, knowing I’d catch him on the quicker parts of the run-in, I heard some words of encouragement from Phil B on the sidelines and gritted my teeth for the finish. Phoenix and I battled over the last few hundred meters, surging past each other until I finally nailed it on the sprint finish. Turned out this guy was at least 15 years older than me so I can’t call it my proudest moment but I’m pleased to have gone quicker again in my 3rd outing at Goodwood.

My finish time was 31:13 and i finished in 77th place. Almost 30 places higher and 2 minutes quicker than last time. The winner was Chris Zablocki, a 2:18 marathoner who completed the course in 24:00 exactly. This was a new course record and is truly mindblowing speed for a middle of the pack racer like myself.

Finally, Andy from Worthing Striders – if you ever read this, I apologise, its nothing personal, lets race it out again sometime!

Latest from the blog